President Federico Franco announced on Wednesday that a military contingent was to be deployed to Concepción in Northern Paraguay following two separate attacks thought to be linked to the Ejército del Pueblo Paraguayo (Paraguayan People’s Army- EPP) on Tuesday night.

The EPP are a known terrorist group who are believed to have strong links with the FARC in Colombia.

The two attacks, which happened almost simultaneously, took place almost a kilometre apart, both in the town of Azotey. These attacks have taken the tally of similar aggressions carried out by the EPP to five since Franco took office on 22 June.

The first attack occurred at the house of Eusebia Maíz, who was shot in the head at point blank range by camouflaged aggressors. They then blew the victim’s head off by attaching plastic explosives to her neck.

The attack was immediately linked to the EPP due to the close personal links which Maíz had with the guerrilla group. As the aunt of two of the EPP’s known members, Bernardo Bernal ‘Coco’ Maíz and Antonio Bernal Maíz, it is believed that Coco ordered the hit suspecting the victim’s involvement with information leaked to the national police force in March, which had seen the capture of one of the group’s members, Néstor Ocampo Fernández.

National security also have reason to suspect that the victim could have been involved with the logistical side of insurgent group’s activities.

The second attack occurred at a local police checkpoint in Azotey, where two policemen were shot at by unidentified armed men. Both policemen were severely injured and transported to the “Rigoberto Caballero” police hospital in Concepción.

One of the men, named as 25-yea-old Victor Alexis Acosta died in hospital on Thursday afternoon due to the injuries he sustained during the attack. His family had decided to switch off his life support machine in order to donate his organs.

After having visited the injured policeman in the hospital, President Franco decided to send military representation to Concepción in an attempt to help fight insecurity.

Given that one of the issues for which former President Fernando Lugo was most heavily criticised was his inability to control such eruptions of violence, the attacks do not bode well for Franco’s popularity; an idea which was reiterated by Lugo himself when he said that the president was ‘unpopular’.

In spite of the fact that the town of Azotey was shaken by the two attacks, Franco announced in a press conference on Friday that the government had no intention of calling a ‘state of exception’ in the region.

In an unusual move, President Franco interrupted worship at a church in Villa Florida in Southern Paraguay in order to confront Monsignor Melanio Medina about disparaging comments which he had made about the government’s plans to use transgenic seeds.

Franco’s government recently approved the use of genetically modified cotton; a polemical decision which was met by the protests of many workers.

Franco asked the Monsignor if he thought that the president would do anything to damage the ‘health and environment of the people of Paraguay’. He went on to tell Medina that the seeds, which had been developed by God, ‘through science’, had provided them with the necessary tools by which to cultivate cotton in this way.

He went on to say that far more dangerous than genetically modified seeds are the EPP, following their most recent attack in Concepción.

The president later caused a furore on Twitter when he implied a link between the Monsignor and the EPP. He said that Medina hadn’t responded to his question involving the EPP and questioned the monsignor’s priorities.

Medina has yet to respond to the accusations.

National director, Renate Costa Perdamo this week made history by becoming the first Paraguayan to have work featured in the revered Venice Film Festival. Her short film ‘Resistente’ (2012), made in collaboration with the Finnish filmmaker Salla Sorri, competed in the ‘Horizonte’ category on Thursday night. The results were pending at the time this article went to press.

Costa, who rose to fame both nationally and internationally following her hard hitting and incredibly moving documentary, ‘Cuchillo de palo/108’ (2010) said that the whole experience had been ‘really exciting’.

The news marks another significant step for Paraguay’s fledgling cinematic industry who have recently experienced great success with the collaborative thriller from Juan Carlos Maneglia and Tana Schembori, ‘7 cajas/ 7 Boxes’ (2012) which will be competing this week in the Toronto International Film Festival. 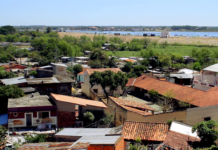 Ache natives take to the streets to demand land rights, as tensions mount between Paraguay and Brazil regarding the binational Itaipu dam.

Ache natives take to the streets to demand land rights, as...